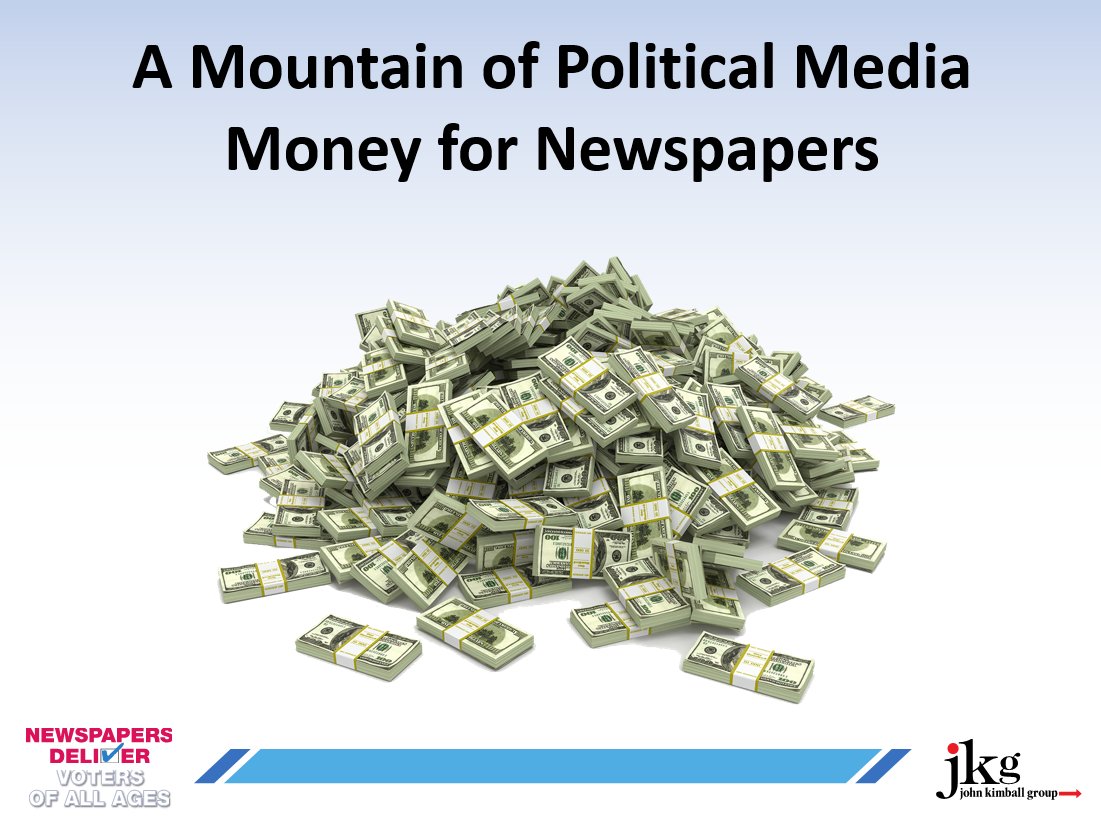 A billion here, a billion there, it adds up: The John Kimball Group expects political ad spend in the 2020 election will be close to or exceed $12 billion. Thank the U.S. Supreme Court’s Citizens United decision declaring political spending is free speech and political action committees (PACs) can raise and spend almost unlimited amounts of money, without disclosing publicly who its donors are and where their money is coming from.

All politics is local. Of the ad spend likely to go to newspapers, fully 70% will be spent on local and state elections. Some expected breakdowns:

If they ask, why your newspaper? The big answer is that newspapers continue to draw audiences of all ages. The other big answer — keep repeating this to yourself and campaigns — is that voters read, and readers vote.

John Kimball said it: “Newspapers have unique ability to motivate voters because our newspapers, in print and digital, are considered more trustworthy.”

You’re number one! Remember that the bulk of political advertising will be in markets where newspapers are the number one medium. That’s especially true during the COVID-19 crisis — which is also growing the trust numbers.

Vote early, if not often. Vote-by-mail, which will likely be rolled out through most if not all of the nation means the voting will take place earlier than before. John Kimball: “This means you must get in front of candidates as soon as possible.”

Your readers, their voters. The people who go to the polls and vote are the ones who are reading newspaper products. The numbers of newspaper readers who vote: 79% of Democrats, 78% of Republicans and 76% of independents. More than 20 million people have local newspaper apps on their smartphones.

John Kimball said it: “These are the people candidates need to reach.”

Just behind the boob tube. While television is likely to get about half of total political ad spend, and the medium is cited by 66% as a motivator to vote, newspapers are number two among all media with 48% of voters saying they are motivators.

Turnkey solutions. The Kimball Group, for one, has them, with sample rate cards, contact info for candidates, political ad agencies and PACs. You can see them in the PowerPoint presentation linked below.

The Citrus County Chronicle chronicles. The Florida newspaper is an example of how to attract political advertising. Its political media kit includes demographics of its audience, including the eye-catching — for candidates — disclosure that eight of 10 of its readers have contributed to political campaigns. If this kind of data is not available at your paper, national newspaper demos are likely to reflect your local audience.

Show me what you’re taking about.  Like any rate card, the Chronicle includes ad size options. But crucially, it also shows what  full-page, half-page, eighth-page ads look like. Remember, your local candidates are not professionals at this and need to be shown exactly what they can buy.

In God we trust. All others pay cash. Political advertising is all cash in advance because, well, there is nothing harder to do than get money from a candidate who lost. But everyone understands that political ads are paid for upfront.

You asked: We have been told doing anything other than open rate would be seen as contributing to the campaign. John Kimball’s answer: That might depend on your state election laws; consult the election commission for specific answers. But for the most part, if you have a package that is, in essence, something anyone could buy, you’re likely okay. If you’re worried about that, check with the state election commission. If you can’t get in touch with them, get in touch with John Kimball and he’ll find out.

John Kimball said it: I would say, charge the fair price you would charge anybody else for what you get in a package.

You asked: How do newspapers position themselves versus direct mail? A personal anecdote from John Kimball: In a recent Virginia off-year election, he received two direct mail pieces the day after Election Day and another two days after the polls closed. If you can print a flyer yourself or put it in as an insert, you can guarantee day-of-delivery. Let candidate know it’s in a product that has market acceptance and is not seen as junk mail.

Short answer to a long question: Again, emphasize you attract the people who actually vote. 80% of the people who show up to vote are reading your newspaper. That’s a very powerful message and you can’t emphasize it enough.

You asked about that damned Facebook objection. Offer them the opportunity to run in your Facebook page or in other digital events you are planning, such as virtual town halls. Don’t just cave in to the objection that I’ve got Facebook and that’s all I need. It may be sexy and hip to use Facebook, but the end game is to get elected — and you have the ability to deliver.

Show your support for John Kimball. Contact him at 703-282-1311 or john@JohnKimballGroup.com