Promotions to Run Now and Who Should Run Them 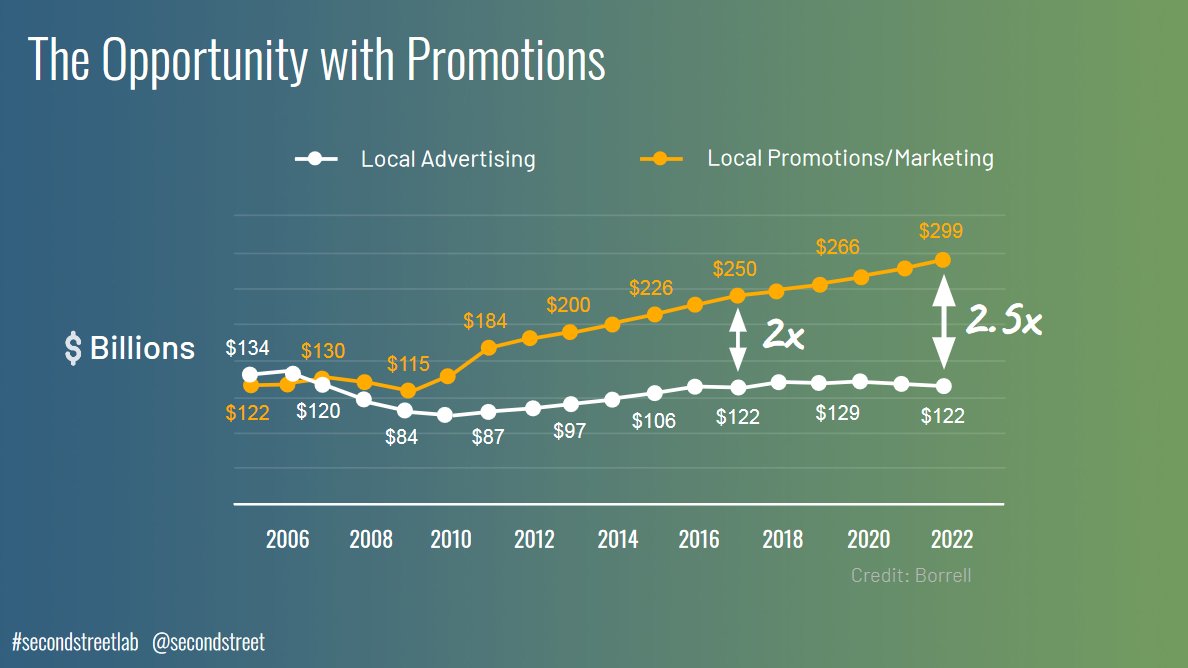 View a recording of the webinar on our YouTube channl

Why promotions? Local advertising has been flat for the last decade, while promotion spend is growing at 2 to 2 ½ times faster.

Lesson from the Great Recession: As advertising dipped after 2008, promotions began to take off. Julie Foley: “So this has happened before.”

What do advertisers want right now? They want a lot of things, and that’s why you have to keep talking with them. They want:

Don’t be shy. Second Street is finding many ad reps are reluctant to approach businesses. But your advertisers do need you. Talk about how they are doing personally and professionally. Have a real conversation with them, which might be, “Maybe we should talk a little later.”

When you’re pitching. Make sure the registration form you offer asks the right lead questions. Be sure to have email opt-in for them. Be sure to incentivize sharing. Make sure the promotion has an appropriate prize for the target audience. Example: If you’re promoting a roofing company you want to reach people who are interested in getting a new roof, so make that the prize. If you offer, say, an iPhone, everybody will enter and the leads won’t be quality leads.

Case study: Apartment complex. The company offered free rent for a year to one winner and shorter rent-free prizes. More than 100 asked to be contacted by the complex, and five signed leases for a year. The promotion made $9,000 for the radio station that ran the promotion.

Case study: driveway paver. This is a good one for people isolated in their homes and looking for improvements. This was a contest to send in photos of their driveways to win a paving job. It had 970 participants, 148 email opt-ins and 66 requests for estimates. The promotion generated $250,000 in business for the paver.

Right now, there is money on the move. People have cancelled vacations, are thinking of moving to different investments or financial advisors and looking around for home improvements.

Case study: private pre-school/day care center. The center offered six months of day care for free. The promotion had 62% of those entering the sweepstakes opt-in for email and generated 30 “hot leads,” that is, people who have asked for more information or a tour of the facility.

Case study: Real estate broker. The promotion, run by The Patriot Ledger, offered free rent or mortgage payments for a year. The broker got 162 leads and attributed $6 million in transactions to the promotion.

How many contests can a newspaper run at the same time? Never run just one. All promotions — whether for roofers or HVAC companies or child care — reach different target audiences. Every promotion is going to reach a different segment of your market. So, you can’t have too many promotions at a time, you just don’t want to promote, say, separate contests for two very similar businesses at the same time.

Juley Foley said: “Email is the number one driver for conversions, that is, entries.” Always have a robust email campaign for any promotion. The number two key to a successful program is making sure the prize is right. “It has to be a prize that will actually motivate someone.”

You asked: What about promotions for restaurants that are limited to takeout now? Funny you should ask. A Baton Rouge media outlet is sponsoring a bracket contest to name the favorite restaurant takeout. The participating restaurants contributed gift cards as prizes. Liz Crider Huff: “They want people to know they are there” and open.

Looking to the last half of the year. Your Q3/Q4 planning must include a citywide ballot. That’s going to be the biggest revenue and audience generator of anything you can do. Any promotions you had previously budgeted for right now should probably be postponed to later in the year, in favor of the ideas discussed in this webinar.

Download the PowerPoint presentation as a PDF or as Google slides.