What Local Advertisers Need Right Now ... and How to Help Them 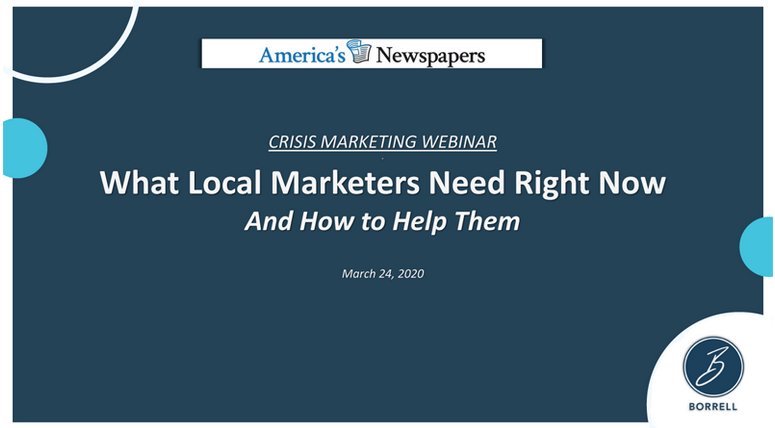 View a recording of the webinar on our YouTube channel

History lesson, part one. Going into the Great Depression, Post and Kellogg dominated the market for packaged cereal. As the economy tanked, Post cut back on advertising. Kellogg instead doubled its advertising budget and shifted much of it to the emerging medium of radio. Kellogg’s profits and market share soared and it took its place as the dominant cereal maker.

History lesson, part two. After the 9/11 terror attacks in 2001, businesses of all types cut or eliminated their ad budgets. But GM kept up its advertising — and sold more than 1 million vehicles between September 12 and the end of the year.

Gordon Borrell on the message to advertisers, part one. Don’t believe us, we have an interest in advertising. Listen to the Small Business Administration, which encourages running promotions to drum  up business in hard times.

Your advertisers’ mindset then. Borrell Associates surveys showed that coming into 2020, businesses were in an optimistic mood. More described the economic climate as excellent and expected to spend more on advertising than they did in 2019.

Your advertisers’ mindset now. Not surprisingly, that confident optimism is gone. The NFIB Research Center, which focuses on small businesses, polled them on March 10 and 11 and found “uncertainty on top of uncertainty,” Corey Elliott said. The businesses were seeing slower sales, and disruption of their supply chain, but more than half, 54%, said they hadn’t done anything in reaction to the downturn.

Gordon Borrell said it: “You can imagine the amount of chaos. They were feeling really good and all of a sudden the rug was pulled out from under them. They need your help. This is a perfect storm for them — and this is a time when they really need a friend.”

History lesson, part three. Disasters that force people to shelter in their homes like hurricanes or floods lead to more consumption of news media — and that’s been the case with the coronavirus. According to ComScore, there was a 33% jump in media consumption between February 24 and March 12. And most of that increase came from newspaper sites, Gordon Borrell said.

Closed or open, local businesses need newspapers. If they are essential business that are remaining open during the pandemic, this is a great time for them to communicate how essential they are to the community. If they are deemed “non-essential,” they should be communicating that they are still around and will be back in business soon.

Data points that are talking points. Borrell Associates has just completed a survey asking businesses how long they expect this pandemic downturn to last. A combined 43% say from one to four months, a fairly optimistic projection. Share that with advertisers to show how their peers view the situation.

Lead with empathy. In your approach to potential advertisers in a difficult time, start with empathy. Pick up the phone and call them. Jim Brown: “When you talk to them, put yourself in their shoes. Ask about their family, their employees. But the ultimate question will be, how can I get back to  normal?” Have a “future-forward” conversation that focuses on long-term prospects. Business will turn around, so how can you help them?

Jim Brown said it: “Change the conversation from ‘advertising’ to ‘communicating.’” If the business isn’t open, that’s all the more reason to communicate with customers.

Carpe diem! Ad reps can also focus on the competitors to a potential advertiser. Do they want to lose market share during the pandemic? Jim Brown: “Every day that goes by is a lost opportunity for them.”

Promotions for a pandemic. It’s no coincidence that promotions began their explosive growth during the Great Recession in the 2008 to 2010 timeframe. Second Street’s Matt Coen: When comes a downturn comes, advertisers want to know what results they will get. They want something measurable, and they are looking for data they can turn into leads.

Matt Coen on money movement: “We think there is going to be money on the move right now. People looking at their 401K and wondering if they are in the right place (to invest).” An “Are You Ready for Retirement?” quiz designed for Edward Jones, the financial services company, attracted a lot of emails and some substantial leads.

Some other ripe targets:

You asked: How do we look like we’re not exploiting them in bad times? Again, lead with empathy. Your first question should be, how is business. Next, when will it be over? Good question, we just found this research information.

Gordon Borrell said it: “Above all, you’ve got to be positive. Be a leader. Start with empathy and have three ideas in your pocket.”

You asked: What’s the response to a potential advertiser who says, oh, we just use our Facebook page? Go find a statistic on how many people are actually using Facebook. They’re probably only meeting current customers on Facebook. This is an opportunity to steal business from their competitors.

Want to follow up with the Borrell Associates presenters? Email them at  info@borrellassociates.com or call 757-221-6641.

View a recording of the webinar on our YouTube channel