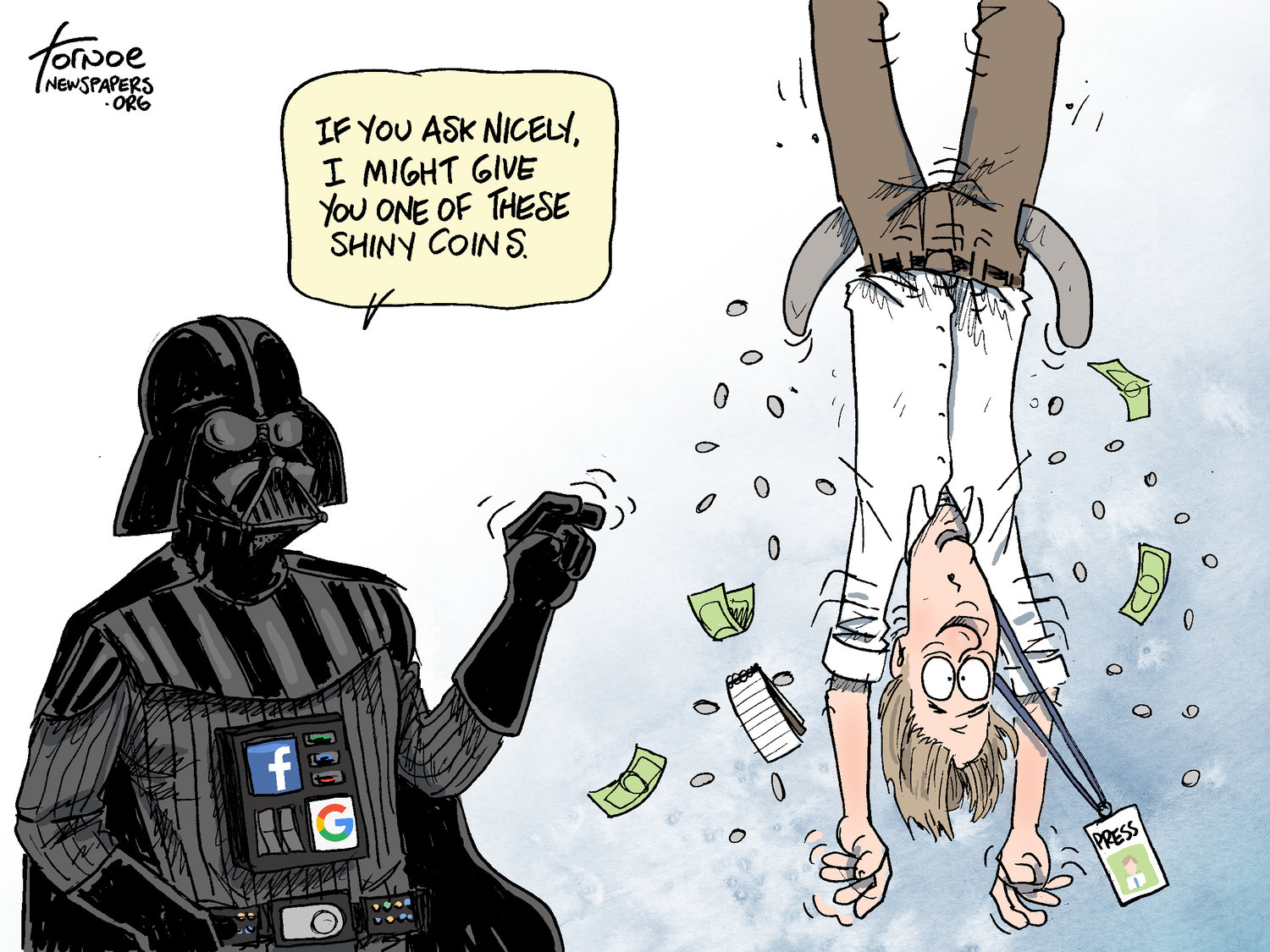 Editor's Note: America’s Newspapers’ advocacy efforts include seeking a more level playing field in the digital environment to provide our members with fair compensation for the use of their content. Members are encouraged to publish the opinion piece and editorial cartoon below or write their own to educate the public and our legislators about this important issue.

If you are a newspaper subscriber or you pick up a copy at a local retailer, you pay for the news and information you receive in your paper’s print edition or digital outlets.

But it may surprise you to learn that the multi-billion-dollar digital behemoths Facebook and Google don’t pay for the enormous amounts of news content they scoop up from newspapers every second. Facebook doles out a little bit of money through grants and funds to a few publishers — and Google provides some small grants through its News Initiative. While these are positive steps, they in no way make up for the use of the news content they are using for free.

Newspapers’ original reporting, especially on the community news and information that only local papers can provide, drive traffic to Facebook and Google, keeping people on their sites longer and attracting advertisers.

And news is a rich source of revenue for the Big Tech platforms. A 2019 study conducted by the News Media Alliance concluded that news publishers’ content makes up 16-39% of Google’s search results, which goes largely uncompensated. That figure doesn’t include the more intangible benefits that news content, and the data that comes with it, provide the search giant, such as using it for new product development.

The irony is that the news and content that newspapers pay journalists to provide is used by Google and Facebook to steadily drive advertising revenue away from newspapers, and into their coffers. The two digital giants now gobble up 60% of all online advertising in the United States — an amount certain to increase with the cratering of newspaper ad revenue caused by the coronavirus pandemic. Facebook and Google don’t have reporters or the associated expense. They rely on small and large newspapers to feed their search results.

Here’s why this patently unfair situation should concern you and your community: It now threatens the existence of some local newspapers, the source of news and information that underpins democracy and civic life itself.

It’s long past time for Google and Facebook to do what newspapers and their subscribers do: Pay for the local news that benefits them so richly.

There are ways for that to happen. Ideally, Google and Facebook would take the responsibility and voluntarily propose a method to share revenue with newspapers and other news organizations. They already pay licensing fees to music publishers, for instance.

Realistically, though, the two behemoths will have to be forced to a solution. America’s Newspapers, an association of some 1,500 newspapers including many operated by families for multiple generations, along with the News Media Alliance and other media associations have urged Congress to pass the Journalism Competition and Preservation Act, allowing newspaper publishers as a group to negotiate rates with Big Tech.

Other nations around the world have taken notice of the ill effect the market dominance of Google and Facebook has on the viability of independent journalism. Australia is now developing a code that would require Google and Facebook to compensate news organizations when their content is used in the digital giants’ news products. Similarly, France just ordered Google to negotiate with news publishers over pay for news content.

This public health crisis has demonstrated the importance of the reporting of local newspapers, even as it has wreaked economic havoc on them, forcing layoffs and even silencing printing presses on some days. Requiring Google and Facebook to pay their fair share for news would go a long way to restoring the long-term health of your local newspaper.