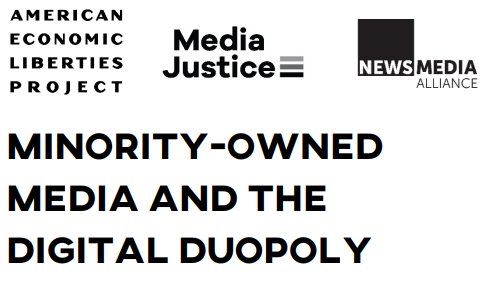 Today the American Economic Liberties Project, MediaJustice and the News Media Alliance jointly published a new report, “Minority-Owned Media and the Digital Duopoly,” which examines the history of minority-owned media and the impact of the ascendance of Big Tech platforms, such as Facebook and Google, on minority-owned outlets and those targeting underrepresented communities.

Through an extensive research and information-gathering effort that included conducting interviews with several representatives from minority-owned news outlets, the report demonstrates how minority-owned media’s continued survival — as well as the addition of new outlets — is being threatened by the digital platforms’ anticompetitive practices.

The report states, “The U.S. Census Bureau projects that racial minorities — primarily Blacks, Asians, Native Americans and Hispanics — will constitute the majority of the population by 2045. Given the unique challenges and the strong legacy of many minority-owned publications, the need for their survival is acute.”

As with local newspapers, niche publications aimed at certain racial or ethnic groups provide high value to their communities, sharing what is happening locally, nationally and internationally that impacts their readers’ daily lives. However, unfortunately, they also have been hard-hit by the transition to a digital advertising marketplace that is dominated by the Duopoly.

“Facebook and Google’s dominance over online advertising poses an existential threat to journalism — and specifically to media owned by and designed to serve communities of color,” said Nidhi Hegde, co-lead of the American Economic Liberties Project’s Access to Markets program. “Without an open and competitive advertising market, minority-owned publishers cannot generate the revenue they need to survive, and Black and brown entrepreneurs cannot start and grow new media ventures. The way to spur innovation and protect critical civic arenas for communities of color is to break Facebook and Google’s monopoly power.”

“In the digital age, companies like Facebook and Google have reshaped where people get their information. Similar to traditional media gatekeepers, these tech companies systemically block people of color from owning and controlling our own stories while amplifying hateful content and disinformation that further harms our communities,” said Steven Renderos, executive director at MediaJustice. Marginalizing people of color is profitable for these tech platforms, and that’s why we need solutions that think beyond the current gatekeepers into a future where alternative newspapers and press can reach our communities.”

News Media Alliance Executive Vice President & General Counsel Danielle Coffey said: “We are currently facing a crisis in which our valued news publications are suffering from a dire lack of financial resources needed to survive. Two dominant tech companies — Google and Facebook — are forcing everyone to play by their rules, using news publishers’ content to fill their platforms without offering fair or adequate compensation. Without immediate intervention to correct this market imbalance, we run the risk of these publications — including minority-owned outlets — fading into history, their legacy forgotten, their future ability to provide critical, high-quality news to underrepresented communities going with them.”

The report concludes, “The ascendance of Facebook and Google threatens the viability of the entire news industry and exacerbates the structural inequities — including a disparity in advertising dollars, resources and access to capital — that have long plagued minority media. These persisting inequities, which require a reconsideration of a broad set of public policies and practices, are now compounded by minority publishers’ reliance on the very platforms that have upended and circumvented the role of the press as independent watchdogs in a democracy.”

Economic Liberties, MediaJustice and the Alliance, in a separate Overview & Introduction to the report, made the following recommendations based on the report’s conclusions:

The Alliance will submit the report to the Senate Judiciary Subcommittee on Feb. 2, 2022 on “Breaking the News — Journalism, Competition, and the Effects of Market Power on a Free Press.”