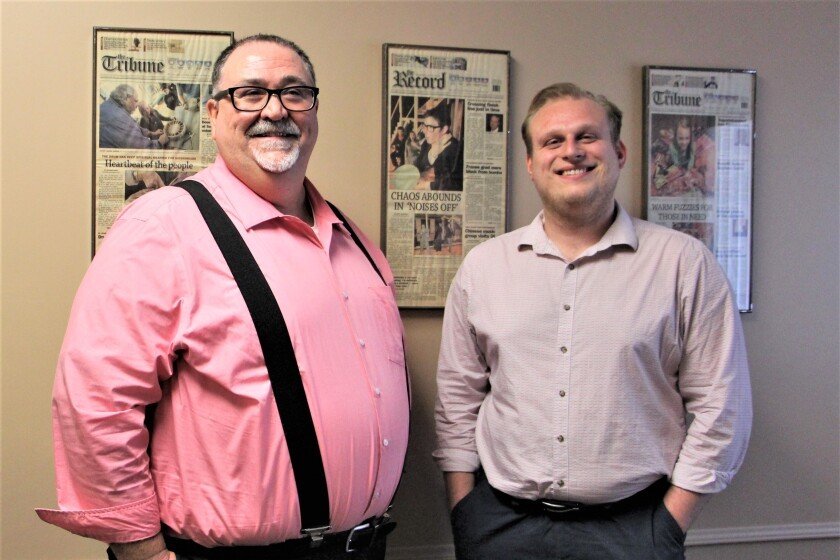 I am so happy to have been able to work with such a talented group of people through my career at FCC. The hard work and dedication of the staff is what has made the newspapers that I led so successful. In my time at FCC, I was able to work closely with Devlyn — he is an excellent fit for this position, and will be an asset to the communities.”
Melissa Swenson, former publisher of the Detroit Lakes Tribune
Nathan Bowe | Detroit Lakes Tribune

There’s a new leadership team at the Detroit Lakes Tribune, with Publisher Devlyn Brooks and Managing Editor Tris Anderson now at the helm.

Brooks brings a wealth of news and business experience to his role as publisher of Forum Communications newspapers in Detroit Lakes, Perham and Wadena.

Over the course of his career, he has served as a regional reporter and copy editor at the Bemidji Pioneer, and was managing editor at the International Falls Daily Journal, Faribault Daily News and the Northfield News.

He was a news editor at the Forum of Fargo-Moorhead and editor of The Bakken Today, which covered the North Dakota oil patch.

Along the way he taught media writing as an adjunct faculty member at NDSU, and early in his career launched and ran a newspaper, the Agassiz Shoreland, in northwestern Minnesota.

For the last four years he has been president of Forum Communications’ Modulist, a media services company that processes paid user content for newspapers and other media. It specializes in the processing of obituaries, milestones (birthdays, anniversaries, etc.) and business announcements, allowing people and businesses to tell their stories how they want them told.

Brooks has also been a part-time Lutheran pastor over the past five years, acting first as a synodically-authorized minister, and then as an ordained minister, at Faith Lutheran Church in Wolverton, Minnesota.

As publisher, Brooks is responsible for overseeing operations at the newspapers in Detroit Lakes, Perham and Wadena. He oversees sales, news, circulation and other personnel, sets sales goals, makes final decisions on editorial policy, and serves as the newspapers’ ambassador to the community.

Brooks and his wife, Shelley, have four children — Garrett, 24, is a registered nurse in Burnsville; Carter, 19, is a sophomore at the University of Minnesota; Ava, 17, is a senior at Moorhead High School; and Siri, 14, is a freshman at Moorhead High.

Brooks replaces award-winning publisher Melissa Swenson, who started with the company in 1999 and became publisher in Detroit Lakes in 2016. She stepped down last month to pursue other opportunities.

"I am so happy to have been able to work with such a talented group of people through my career at FCC," Swenson said. "The hard work and dedication of the staff is what has made the newspapers that I led so successful. In my time at FCC, I was able to work closely with Devlyn — he is an excellent fit for this position, and will be an asset to the communities."

Tris Anderson is managing editor of both the Detroit Lakes Tribune and the Perham Focus. He grew up near Seattle, Washington, and worked at newspapers in Wahpeton, North Dakota, and South Dakota before joining Forum Communications in Detroit Lakes on Aug. 3.

Anderson worked at the News Monitor in Wahpeton, North Dakota, a newspaper that covers Richland County, from September of 2020 to October of 2021, then briefly worked at the Capitol Journal in Pierre, South Dakota, before joining the Detroit Lakes and Perham newspapers.

He lives in Detroit Lakes with his dog Ranger, a black Lab-Rottweiler mix — who looks like a lab and whose bark sounds like he smokes too much. They have been exploring parks in the area this summer.

Anderson has a twin sister, Callie, who is in pharmacy school in Oklahoma, and his parents are retired and spending a lot of time fixing up a house they own on Puget Sound.

In his free time, Anderson enjoys video games and board games, and likes to follow the news.