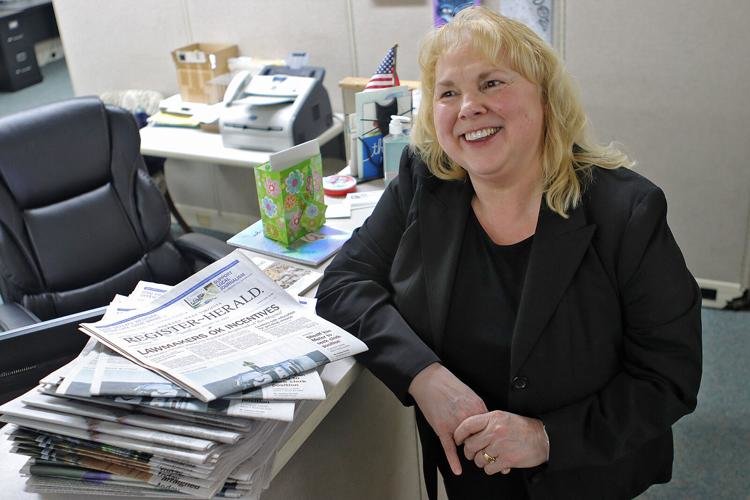 Terri Hale, a Beckley native, graduate of Trap Hill High School and long-time employee of Beckley Newspapers, was named publisher of The Register-Herald on Wednesday, along with the state’s two other CNHI newspapers, the Bluefield Daily Telegraph and the Times West Virginian in Fairmont.

Hale began her newspaper career in 1979 in ad services.

“I was hired by Frank Wood,” Hale said of The Register-Herald’s former publisher who, toward the end of his career, oversaw operations at the three CNHI properties in the state.

Hale began her career climb soon after her hire, working in sales and then stepping up to sales manager. She also served as ad director for The Register-Herald before being promoted to vice president for sales, a regional position with CNHI, the paper’s parent company based in Montgomery, Alabama.

Last year, Hale was named general manager of the three West Virginia papers by Fred Scheller, CNHI regional executive and publisher of the Daily Item in Sunbury, Pennsylvania, who made the Wednesday announcement during a site visit to Beckley.

“Terri has been successful at all levels of the newspaper business,” Scheller said.

“She has displayed impressive leadership skills. Her experience in the business and knowledge of the markets makes her a perfect fit.”

Hale says there is much work to attend to in her new role.

The Bluefield Daily Telegraph has been named newspaper of the year three consecutive years by the West Virginia Press Association, while The Register-Herald won 1st Place in General Excellence this past year among the large circulation papers in the state.

“We impact people’s lives every day,” she said.

Hale, 64, has been married for 40-plus years, and she and her husband, John, have a son, Johnathon, who is a dentist in Oak Hill.

“I love this industry,” Hale said. “I love the newspaper.

“My dad told me that if you find a job you love, you’ll never work a day in your life.”

The Register-Herald, the Bluefield Daily Telegraph and the Times West Virginian are CNHI newspapers. Based in Montgomery, Alabama, CNHI is a leading provider of local news and information, offering a wide array of print and digital products in 22 states. For more information about CNHI, please visit www.cnhi.com.