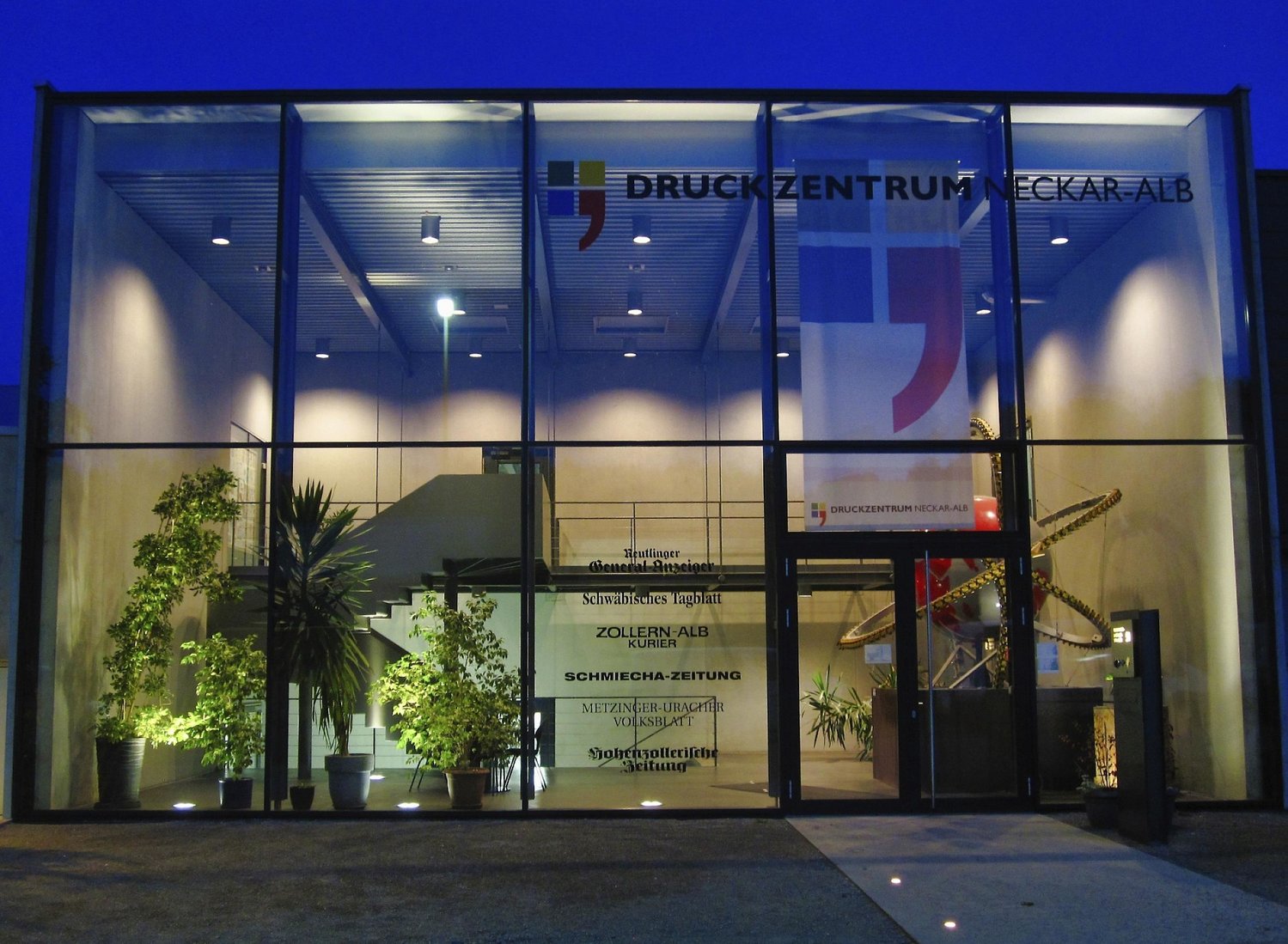 With generally declining circulations, coupled with huge increases in the cost of paper, energy and other materials, newspaper printers are forced to search for ways to streamline their processes and make themselves more efficient. One consequence for Druckzentrum Neckar-Alb GmbH & Co. KG of Reutlingen in southwest Germany has been to switch production over to the KODAK SONORA XTRA Process Free Plate, thus streamlining platemaking enormously.

Established in 2000 by six newspaper publishers from the local area, Druckzentrum Neckar-Alb specializes in newspaper offset printing. The printing center employs around 70 people and is dedicated exclusively to newspapers and similar products. The portfolio includes 11 different daily titles, seven weeklies, six weekly gazettes and numerous third-party and special products, all of which are printed on a two-section Wifag OF470 press line comprised of six towers, three folders and six reel stands. 45 g/m2 newsprint is sufficient for most of these products, although external and special contracts are produced on 52 to 70 g/m2 enhanced newsprint.

The printer first opted for Kodak's thermal CTP technology and plates back in 2011. Since then, the company has installed two KODAK GENERATION NEWS Platesetters featuring high-res KODAK SQUARESPOT Imaging Technology. The KODAK THERMALNEWS PT Plate, which is wet processed, has so far been imaged on the newspaper CTP systems.

The road to process free technology by Kodak

Last year, the company's management addressed the question of how to take platemaking into the future, because the two platesetters were getting on in years and unscheduled service calls were becoming a regular necessity. "We discussed all of the possible options internally. We even considered abandoning thermal altogether and going over to violet CTP," says Ulrike Köhler, managing director. "But what we really wanted to do was make our plate production more stable, more efficient and more streamlined. That's why we ultimately stuck with thermal plate imaging and decided instead to introduce process free.”

The printer's decision was prompted by the results of tests with KODAK SONORA Plates which had already been carried out about two years previously on Kodak's recommendation. "The Kodak technician merely adjusted the laser power of one CTP system for the process free plate, and we were ready to go right away. We used normal thermal plates for the printing test on one half of the press cylinder and SONORA Plates on the other. The press settings were all left as they were — the dampening and everything else as well," Köhler reports. "It was amazing how easily we were able to use the SONORA Plate on our press. We were also very impressed that the SONORA delivered the same printing quality as our standard plate and showed excellent behavior on press during the trial run."

The switch to process free coincided with Druckzentrum Neckar-Alb's investment in new CTP technology. The existing GENERATION NEWS Platesetters were replaced by two new models of the same type. In the Z-speed version which was chosen, each of these fully automated CTP systems offers throughput of 300 plates per hour for the 346 x 530 mm broadsheet format that is the norm in Reutlingen. The platesetters are equipped with four plate cassettes and are capable of holding up to 1,600 plates each. With weekly demand averaging 5,000 plates, the CTP systems only need to be supplied with fresh plates once every few days.

The new platesetters that went into operation in early May 2022 are used to image the SONORA XTRA Process Free Plate. "Compared to the SONORA generation with which we conducted our original tests, the SONORA XTRA is not only less prone to scratching; it also provides greatly enhanced image contrast," Köhler explains. "That represents an important advance, because our press operators were afraid they wouldn't be able to read the information that is imaged in the plate bending area for positioning the plates on the press cylinders. They needn't have worried, though. The camera system of the punch units also captures the registration marks on the plates without any problem. What's more, the SONORA XTRA has the same ability to run clean fast and the same printing properties on press as the plate we were using before."

With a specified run length of up to 400,000 impressions in coldset web offset, the SONORA XTRA Plate far exceeds Druckzentrum Neckar-Alb's printing requirements. The longest runs there are in the region of 100,000.

The migration to Kodak's process free plates meant the two plate processors became redundant and could be dismantled. The new GENERATION NEWS Platesetters and the Nela register punching and bending systems and plate sorter in the CTP room, which is directly adjacent to the press area, were subsequently rearranged — a significant improvement compared to the cramped layout in the past.

The related consumption of chemicals, electricity and water was likewise eliminated along with the plate processors, and there were no residual liquids to be disposed of — with obvious environmental and cost benefits. "Every four weeks, the processors also had to be emptied and thoroughly cleaned, which took about three man-hours," Köhler adds. "On top of that, we were faced with maintenance and repair costs for these machines. That's all history now, so in addition to some very time-consuming tasks, we're saving between 15,000 and 20,000 euros a year as a result”. However, she regards the efficiency gains in the daily production process since switching to the SONORA XTRA Plate as, if anything, even more important: "In contrast to the former situation, our platemaking process is now completely unattended. The press shift supervisors simply start the plate output, and the printers then collect the imaged plates, sorted by tower, from the sorter and mount them on the cylinders."

More than satisfied with process free

For Ulrike Köhler, production with the SONORA XTRA Process Free Plate is where the future of newspaper offset printing lies. "Migrating to process free has given us the efficiency and cost benefits we were looking for without having to make any concessions concerning the stability and quality of our printing process. Nothing whatsoever has changed for our printers." Her verdict: "We're more than satisfied with this plate technology. And the weekend we spent installing the new technology in the platemaking department was a successful project in every respect. The preparations were excellent and the cooperation between Kodak, Nela and us worked like clockwork."

Kodak is a global technology company focused on print and advanced materials and chemicals. We provide industry-leading hardware, software, consumables and services primarily to customers in commercial print, packaging, publishing, manufacturing and entertainment. We are committed to environmental stewardship and ongoing leadership in developing sustainable solutions. Our broad portfolio of superior products, responsive support and world-class R&D make Kodak solutions a smart investment for customers looking to improve their profitability and drive growth. For additional information on Kodak, visit us at Kodak.com and engage with us on Twitter @KodakPrint and on LinkedIn at Kodak Print.