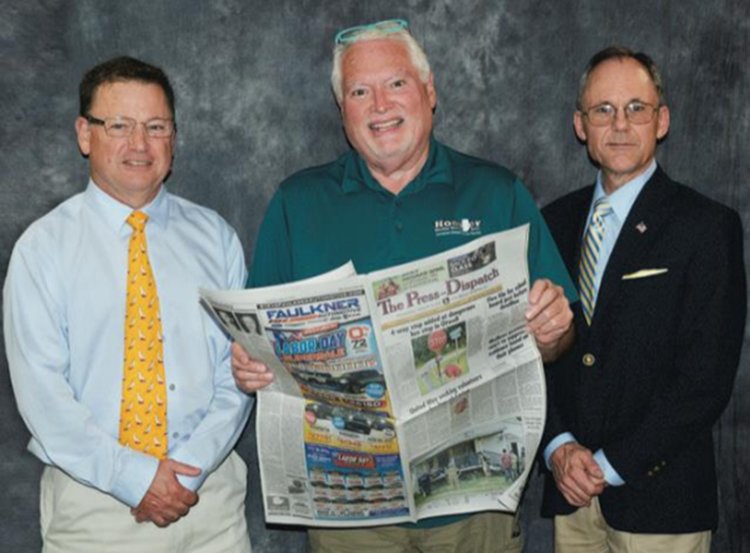 Don Hurd, president of Heartland Communications, stands with Press-Dispatch co-publishers Andy (l) and John (r) Heuring of Pike County Publishing Corp. The brothers have been involved with publishing for more than 40 years and sold The Press-Dispatch and South Gibson Star-Times in Fort Branch to Heartland on Sept. 1.
Posted Friday, September 23, 2022 3:40 pm

We will be featuring stories about the people and places of Pike and Gibson Counties that our readers will love. I call it refrigerator journalism because my parents would always cut out articles about their children and post them proudly on their refrigerator for all to see.”
John Hurd, president of Heartland Communications
Press Release | Business Valuation Consulting, LLC

Two Indiana newspapers owned by the same family since 1898 have been sold.

Co-owners and brothers Andy Heuring, who has served as editor, and John Heuring, as ad manager, sold The Press-Dispatch of Petersburg and the South Gibson Star-Times of Fort Branch to entrepreneur and veteran newspaperman Don Hurd on Sept. 1. The papers will join Hurd’s Heartland Media Group. His enterprise now operates 22 newspapers in Indiana reaching approximately 250,000 readers every week.

The Press-Dispatch was founded by A.J. Heuring in 1898, and a succeeding generation merged two newspapers to create the South Gibson Star-Times in 1991.

The brothers have agreed to stay on as Heartland employees for a brief transitional period.

The reason for selling is a familiar one. While the papers have been doing well, the brothers look forward to retirement, as the next generation of the Heuring family has pursued other careers. Andy hopes to spend more time with his granddaughters, on the golf course, working in his church and John expects to catch up on many tasks at home, expand his time working with church youth, and taking a long-awaited ski trip.

Their goal was to sell to an independent publisher who knows and appreciates community journalism, and they feel they found that person in Hurd.

John Heuring commented, “I began full-time at the publication in May 1978, and have been involved ever since. The newspapers are a part of who we are and they have been our life’s work. We believe Don’s company will take care of them and be a great fit here.”

Andy Heuring said he is more than ready to retire, but at the same time he treasures many fond memories from his lengthy career as a reporter and editor.

“My only job since graduation from college has been to cover news and sports in Pike and Gibson Counties,” he said “Over the last 40 years I think I have taken a picture or covered a news story on nearly every road and neighborhood in Pike County.”

He added, “During my time of covering people and happenings in Pike County since 1984 and Gibson County since 1991, I have been privileged to work with and meet many great people.”

Hurd describes the mission of Heartland newspapers as “hyper-local.”

“We will be featuring stories about the people and places of Pike and Gibson Counties that our readers will love,” he promised.” I call it refrigerator journalism because my parents would always cut out articles about their children and post them proudly on their refrigerator for all to see.”

Hurd was an 18-year Hoosier State Press Association board member where he served as president and vice president. Additionally, Hurd served on the Illinois Press board of directors and was president of the Indiana Advertising Executives Association.