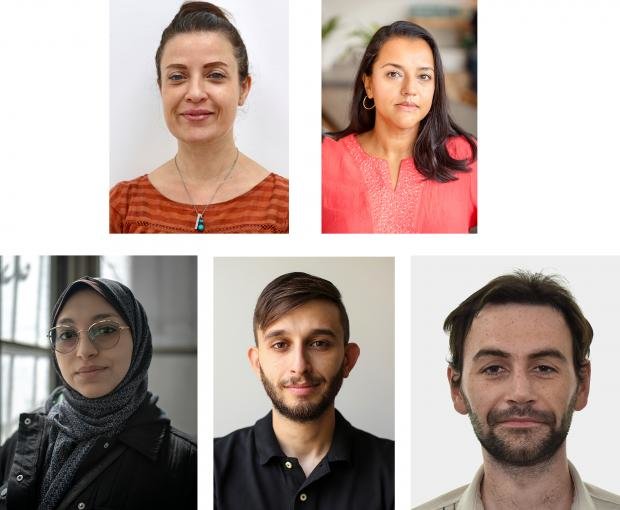 We are thrilled to announce the appointment of two new News Directors, with Riazat Butt taking command of our teams in Pakistan and Afghanistan, and Abby Sewell named the leader of our operations in Lebanon, Syria and Iraq. In addition, we want to highlight the recent appointment of Fatima Shbair as our new photographer in Gaza. We also have two new correspondents — Kareem Chehayeb for Lebanon and Syria, and Jack Jeffrey, a former AP intern, for Egypt, Sudan, Libya and Yemen.

These appointments underscore our deep commitment to our Middle East operation.

Riazat Butt has been named news director for Afghanistan and Pakistan, replacing Kathy Gannon who retired in May. Riazat will be based in Islamabad and start Sept. 15. Riazat has worked as a reporter and editor in some of the world’s busiest newsrooms, including The Guardian, AFP and Al Jazeera. At one point in her career, she was the first non-Christian religious affairs reporter for a major UK publication. She has been based in locations around the world, from London and Doha to Beijing and Hong Kong. A UK native, Riazat grew up in Southampton. She earned an undergraduate degree in Spanish from Oxford University and a master’s degree in Afghan and South Asian Security Issues from King’s College in London. Her familiarity with Pakistani society, based on family ties, frequent visits and knowledge of Urdu, will enable her to adopt the insider/outsider perspective that typically informs some of the most interesting foreign reporting.

Abby Sewell has been named news director for Lebanon, Syria and Iraq, replacing Zeina Karam, who was promoted to deputy Europe news director. Abby will be based in Beirut and start Oct. 15. Before joining the AP, Abby ran a busy and diverse newsroom as deputy managing editor at L’Orient Today, the English language site of Lebanon’s French language newspaper L’Orient-Le Jour. A U.S. native, Abby grew up in California. She earned an undergraduate degree in political science from Reed College and a master’s degree in journalism from Northwestern University. After stints at local newspapers in Oregon and California, she worked on the metro desk of The Los Angeles Times for six years, as part of a team that won the 2010 Pulitzer Prize for Public Service. In 2016, she left the U.S. for Lebanon to realize her ambition of becoming a foreign correspondent. She learned Arabic, to the level of fluency, and worked her way up from free-lancer to news leader at a respected news organization in a competitive environment.

Fatima Shbair joined the AP as a photographer in Gaza in late July. Within days of her start date, her skills were put to the test when Israel targeted Islamic Jihad militants in Gaza, setting off three days of fighting. Fatima produced powerful images, including those showing the suffering of Gaza civilians caught in the cross-fire. She is a self-taught photographer and began working in photojournalism in 2019. The following year, she began assignments for international agencies. She has won several international awards, including a World Press Photo prize, the Anja Niedringhaus Award and others.

Jack Jeffery will join the AP team in Cairo on Sept. 15 as a reporter, to cover Egypt, Sudan, Libya and Yemen. Jack, an Arabic speaker, worked as a paid intern at the AP offices in Jerusalem and Ramallah in the second half of 2021, impressing his colleagues with well-reported text and video stories. Jack has acquired a deep understanding of Sudan, after working as an editor at the independent Sudanese station Radio Dabanga. Jack also worked as a free-lance journalist in Tunisia.

Kareem Chehayeb joined the AP team in Beirut as a reporter in July, to cover Lebanon and Syria. In the preceding year, he worked as the Beirut correspondent for Al Jazeera English. Previously, Kareem worked as a free-lance reporter from his base in Beirut. He also served as a researcher for Amnesty International and the International Rescue Committee.