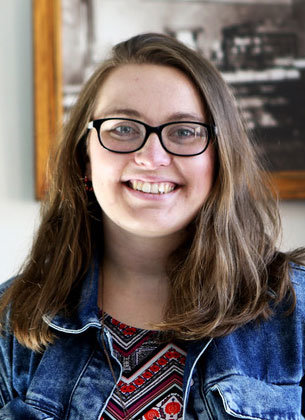 When Olivia Wieseler took over as editor of the weekly Gering (Nebraska) Courier, she searched for content to distinguish the Courier from its sister paper, the daily Star-Herald in Scottsbluff, just across the North Platte River. She decided to use the Kid Scoop Writing Corner … and it’s been a hit with parents, teachers and the community.

“People enjoy reading what kids have to say about their view of the world,” Wieseler said. “They’re surprised by the things kids come up with — how in the world did they think about that? Kids get right to the point, writing an interesting response to the monthly question in three sentences. It’s comical to read,” she said, laughing.

The writing prompt questions appear in the free newsletter she sends to the paper’s public relations person, Jennifer Sibal, who then sends it via email to teachers in the school district. (The “Teacher Scoop” newsletter is part of the subscription to the weekly Kid Scoop page, published in the Star-Herald.) For example, in January 2022, questions included: “What are the qualities of a good leader?” Or … “Tell about a world problem that you would like to see solved. How might you solve this problem?”

“We get a lot of shares on our paper’s Facebook page,” Weiseler reported.

She found “the teachers are really excited to be part of Kid Scoop Writing Corner. They are working on a new language arts curriculum, but even though they are very busy, they are involving their students. And it’s fun for parents.”

In addition to editing the weekly Gering Courier, Wieseler also is a reporter for the daily Star-Herald. She covers education at three schools in the area, plus writes about features and entertainment.

Writing is her passion. “Writing is my favorite thing to do. The Kid Scoop Writing Corner is a great opportunity for kids to learn to structure a paragraph. Students need to learn the importance of newspapers and feel the excitement of seeing their writing published in the newspaper. I want to get the newspaper into their hands and get them involved in the community.”

The small town of Gering, population about 8,000, and Scottsbluff, population about 15,000, reflect the history of western expansion. They sit at the foot of the Oregon Trail Landmark, the bluff towering 800 feet above the North Platte River. It’s a physical landmark for peoples from Native Americans to emigrants on the Oregon, California and Mormon Trails to modern travelers in the Nebraska Panhandle.

As Lewis and Clark explored the west in the early 1800s, now children explore and write about their hometowns as well as the world far beyond the circulation area of these two community newspapers.

The writer of this article is Ellen Creane. She has experience as a freelance reporter for newspapers, an ESL college instructor, a former NIE manager at three newspapers and a marketing communications professional. To reach her for your project, email ellencreane@gmail.com. Also see her LinkedIn profile.